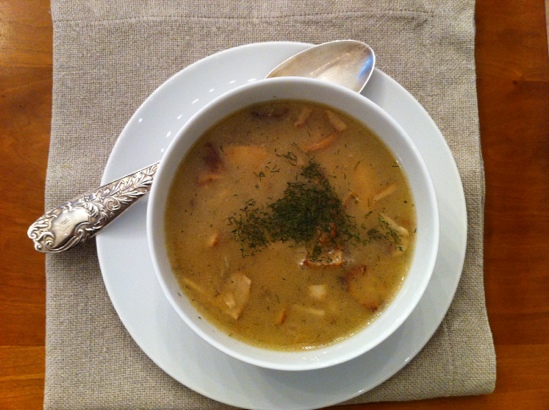 The past few nights have been chilly, raw and damp.  Not exactly quintessential June weather, but then again, June is a wild card.  Sometimes it’s hot and humid, sometimes rainy and gloomy and sometimes, although not often, it is lovely, warm and sunny.  This is New England- a constant hodgepodge of weather that provides a conversation starter with nearly anyone, anytime.

I was in the mood for chowder, but trying to avoid a trip to the grocery store.  So, I went with my instinct and hoped that what I was about to prepare would actually be tasty.  This is my version of imprecise, casual fare using what I have and not really measuring.  If it works, it’s great, but then I find it hard to recreate.  If it doesn’t work, there is always granola as my back up dinner.

Cut up bacon to bite sized pieces and brown in stock pot.  I used frozen, organic, turkey bacon and just cut chunks while it was frozen.

Toss in some cut up onions-I used about one medium sized organic, white onion.  Brown with the bacon.

Add two potatoes cut roughly into  1″  cubes and then some grated raw potato that will serve as a bit of a thickener.  I used organic, red bliss potatoes with skin on.

Dump in some stock. I used veggie stock that I had in the freezer, but any kind will do. Maybe 3 cups or thereabouts.

Add in some fish filets.  I used skinless, boned filets of wild haddock that were frozen. I just put the whole chunk of fish in the pot and it broke into pieces after a few minutes.  Any mild, white fish will do.

A bit of dill.

Don’t cook the fish too long as it will get tough.

Admittedly, I surprised myself that it was tasty. This is a dark brothy chowder from the bacon drippings and very little milk, no cream, flour or butter.

Serve with a spring greens salad and chunk of bread or not….

Give it a go and do your own variations.  Let me know.